Unique Spots to Paddle Board in Florida

We're here to tell you as experienced Floridas paddlers- all the places you should SUP in the Sunshine State that will not only give you the unique view of paddling, great photos, but also not be insanely crowded.

Any respectable stand up paddle board enthusiast has surely launched their SUP board from one of the endless beaches that surround both sides of the “Sunshine State” but there are so many incredible waterways and wildlife to see when you explore the interior of Florida.

How often does one get the opportunity to paddle board ancient springs and coastal dune lakes? The Crystal River is everything that is still wild in Florida–a labyrinthine world of seven rivers, crystal-clear springs, open bays and freshwater lakes that go on forever. Its ideal for paddle boarding.

From the Chassahowitzka River and the mangrove islands of the Saint Martins Marsh Aquatic Preserve to the open waters of the Tsala Apopka Lakes traced by the incredible Withlacoochee River. The view from your paddle board is almost hard to describe. 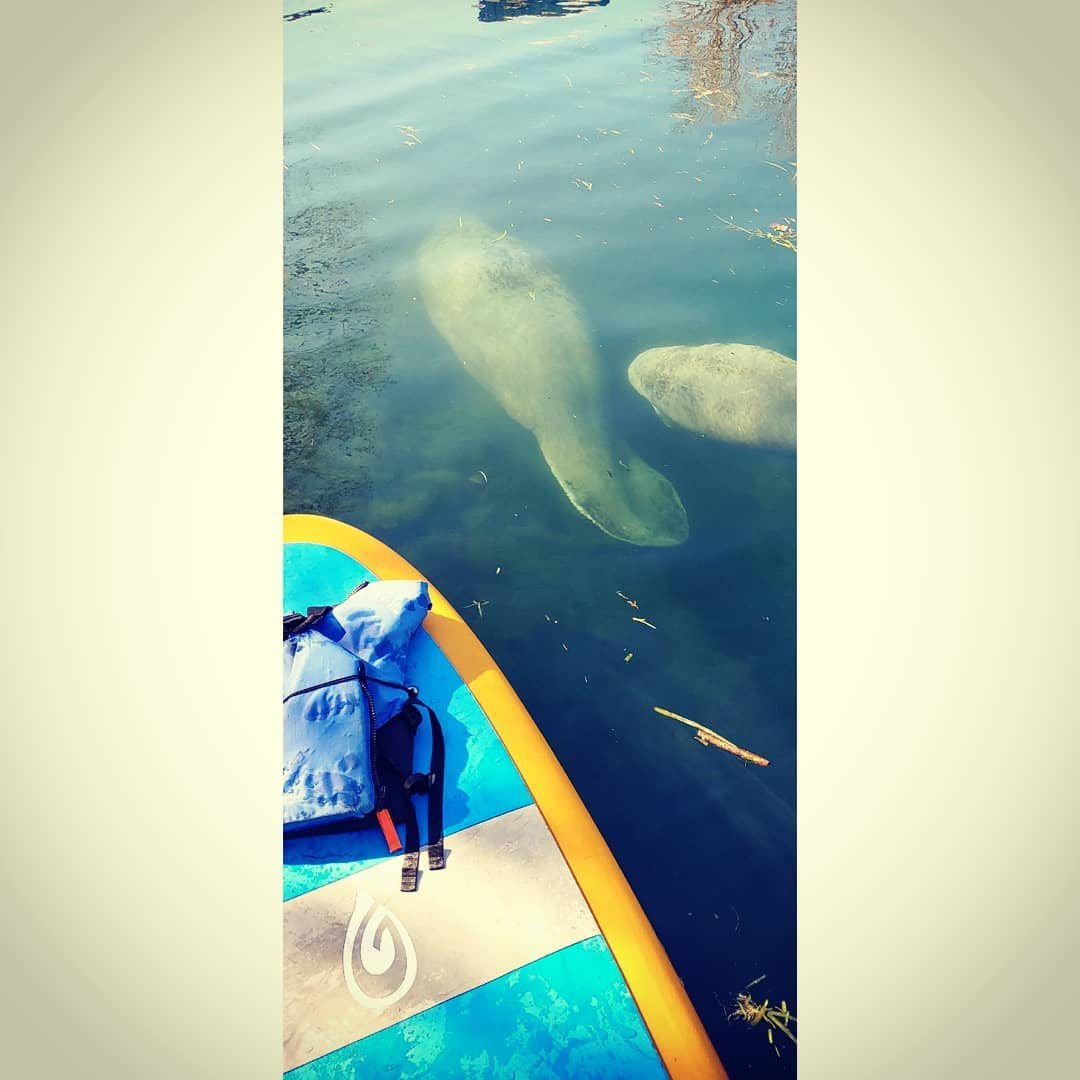 When the water temperature drops in the Gulf of Mexico, manatees move to the warmer waters of the Crystal River, followed closely by nature-loving tourists and other visitors. Also, known as "sea cows", these unique creatures will come up right next to your stand up paddle board.

We’re talking about a veritable paddle boarding paradise that you just can’t find anywhere else in the US. It's river paddling but on flat water with a view right to the bottom of the river.

Located along Central Florida’s "Nature Coast," Crystal River is one of the few places where you can paddle board and swim with manatees. The springs flow at a constant 72 degrees, making the waters attractive to all sorts of swimmers in the winter.

The West Indian manatees are very large aquatic mammals, weighing in around 1,000 pounds and measuring about 10 feet in length. They are docile, slow-moving swimmers that eat 10-15 percent of their body weight daily in aquatic plants.

They often surface for air every 30 seconds while active and every 20 minutes while sleeping. Manatees have no natural enemies and the biggest threats to their survival are interactions with watercraft and loss of habitat. You need to be very careful with your paddle board and SUP paddle so as not to strike these beautiful beasts.

They were placed on the endangered species list in 1966 and have since been under close watch in order to ensure the survival of the species.

It can be a bit unnerving when one surfaces near your paddle board so make sure you’ve been doing your SUP balance exercises!

Stand up paddle board the Coastal Dune Lakes Coastal Dune Lakes are a rare natural phenomenon that only occur in a handful of locations around the globe, including New Zealand, Australia, Madagascar and South Walton, Florida. It is truly a unique place for paddle boarding.

In fact, South Walton has 15 named coastal dune lakes that fall along the Scenic Highway 30-A corridor in Santa Rosa. Lake Powell, the largest of the 15 lakes, falls in neighboring Bay County and is the only coastal dune lake not fully situated in Walton County. If you are into long distance paddling, this is the spot for you. 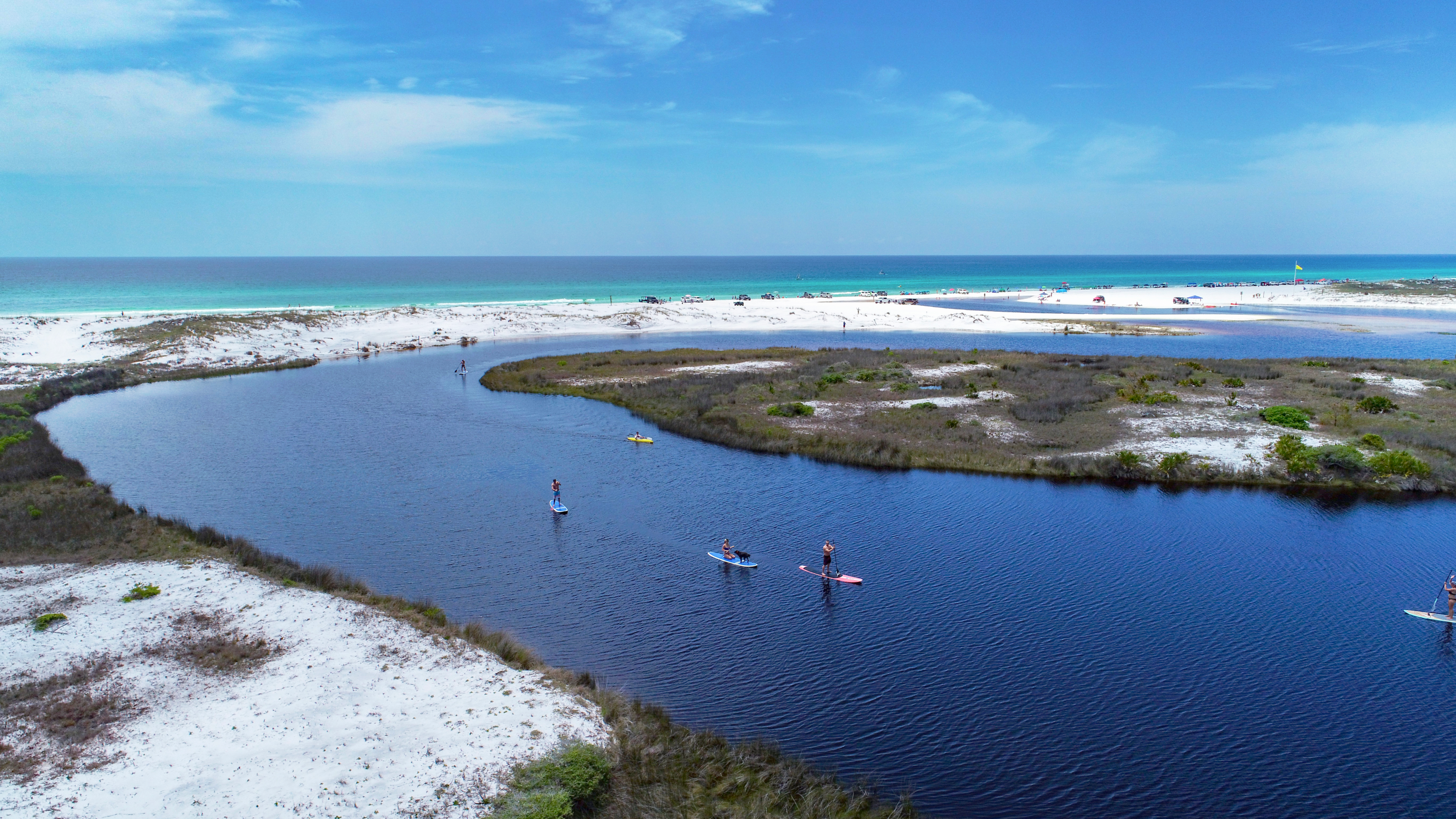 So the next time you head to Florida, skip the predictable tourist attractions and explore the Florida that is mainly just known to the locals on your stand up paddle board. South Walton’s coastal dune lakes are said to be as much as 10,000 years old and were formed by winds that redistributed sand and created the shallow basins (with most lakes averaging only about 5 feet deep). Paddle boarding on these picturesque lakes is truly special.

But what makes these lakes truly unique is that their mostly freshwater content sits within just a few feet of the Gulf’s salt water, separated only by a natural berm of sand.Following a heavy rain or other inflow, the sand berms are suddenly breached, causing a flood of fresh water to pour openly into the Gulf.

This event is known as an “outfall,” and it’s a time when salty seawater can also flood back into the dune lake, until the levels stabilize. The result is a rare brackish ecosystem that’s home to both fresh and saltwater species.

You can paddle board the lakes, paddle to the ocean in Grayton Beach or go to the lagoons and paddle board through the local area. Although, the water is brackish, the area is great for swimming.

If you decide to go into the lake, a right-hand turn will take you through a winding lagoon surrounded by sand dunes and beautiful homes on the water. The lagoon sometimes opens up into the ocean in Grayton Beach. T

One day the water will open up directly into the ocean at Grayton Beach and other days it might be closed off. One day the lagoon might be about 30 to 40 feet wide and another day, it could be the size of a lake.paddle board rentals The Rainbow River is located in Dunellon, Fl, about 20 miles southwest of Ocala, in Marion County. The headspring, Rainbow Spring, is a 1st magnitude spring that ranks 4th in the state for volume, discharging 400-600 million gallons of water a day which means even beginner paddlers can paddle at faster speeds.

The spring is composed of numerous vents rather one single vent. There are many smaller springs along the river, discharging water from numerous caves, crevices and sand boils.

As you paddle your inflatable SUP or hard paddle board with the current from the headspring, the 72-degree water stays clear for the 5.7 miles that it runs before flowing into the Withlacoochee River, where it’s crystal water meets the dark tannin water of the Withlacoochee. 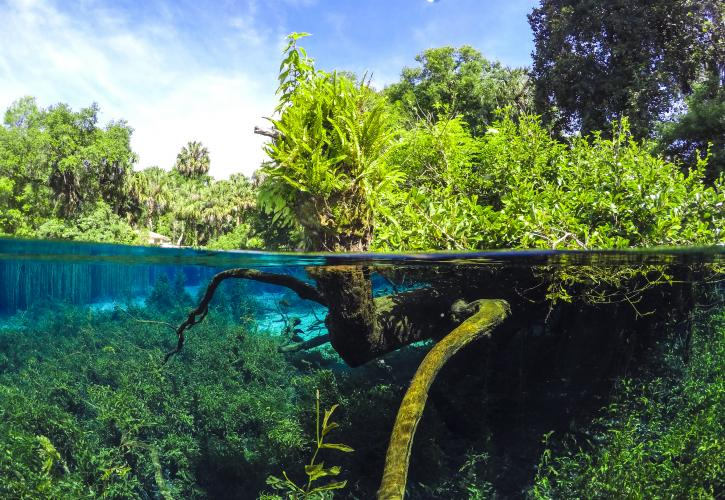 The Rainbow River is exceptionally popular with beginner and advanced paddlers alike because it is so clear. In fact, it’s so crystal clear that when you gaze into the river from your inflatable paddle board, you can see the shadow of your paddle board on the sandy bottom.

You peer into the water and the fish look like they’re in an aquarium, and they too cast shadows on the sandy bottom. It’s no wonder Rainbow River tubing is a sensation and that in winter especially, Rainbow River paddle boarding is so special. No need to bring your own inflatable board as Rainbow River Canoe and Kayak has plenty of all around paddle boards for you! We highly recommend you explore this historic spring-fed river via stand up paddle boards. The Weeki Wachee River begins its 7.4-mile journey at the world famous Weeki Wachee spring.

Named by the Seminole Indians who inhabited the land around the body of water in the early 1800s, Weeki Wachee means “winding river” or “little spring.” One of Florida’s 33 first magnitude springs, the underwater cave connects to the Floridan aquifer and has been dived to depths greater than 400 feet. Approximately 112 million gallons of water gush out of the spring every day, eventually draining into the Gulf of Mexico. Touring paddle boards do quite well here as the board thickness buoys you high above the water.

Though the spring boasts great depths and an immense amount of natural fresh water, it’s the surrounding park that hosts mermaid shows, dating back to 1947, that make the river a popular attraction. When you first launch your inflatable paddle board or solid board into the clear blue water, fish scatter in all directions. Common species found in the Weeki include largemouth bass, bluegill, snook, mullet and sheepshead. At the water’s edge, you will see raccoons, herons, alligators and otters. 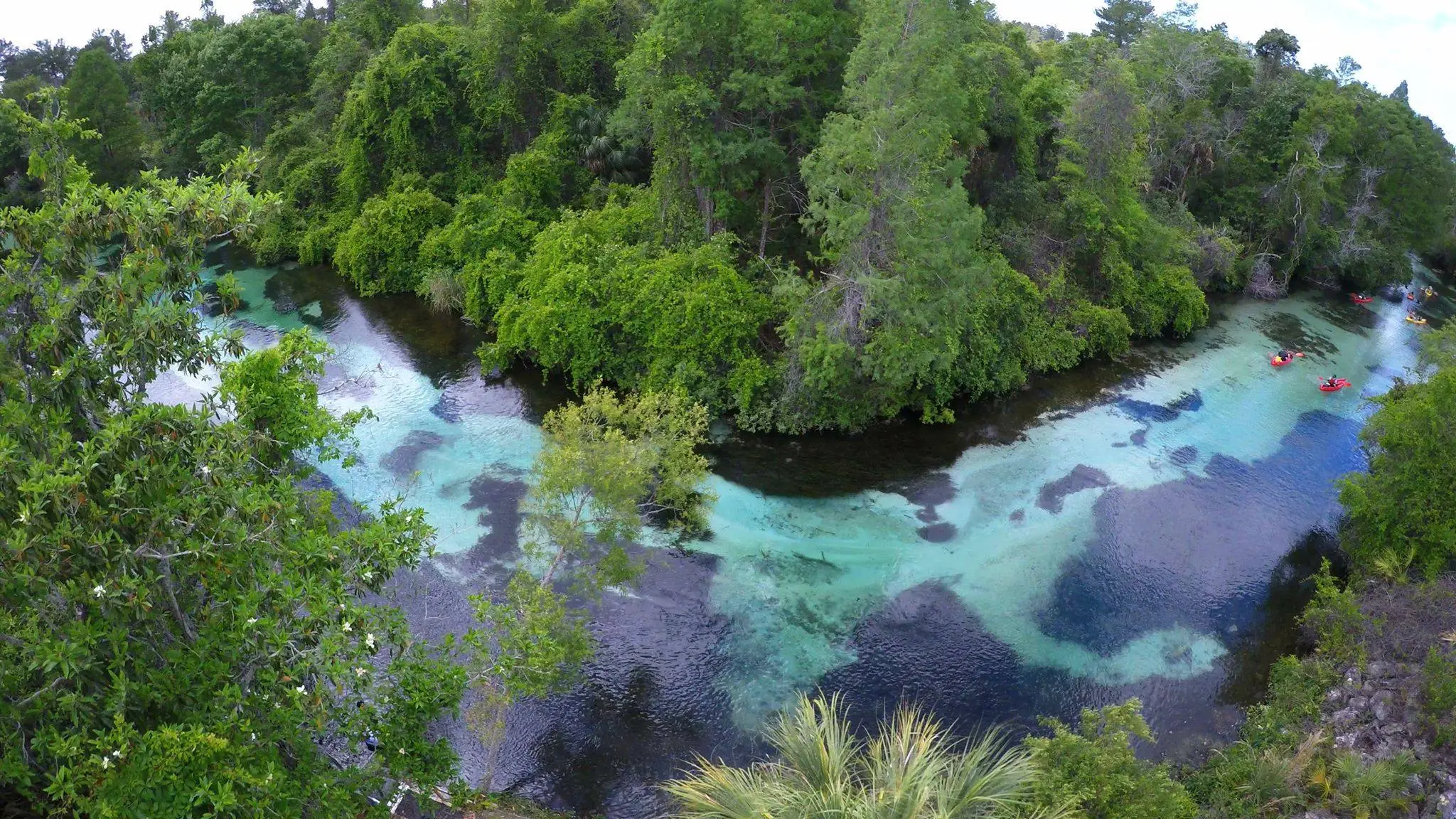 The luckiest of SUP board paddlers could even spot one of the last remaining Florida black bears from the Chassahowitzka National Wildlife Refuge sub-population. Further up the river is a great spot to view manatees in all of their majesty.

The Weeki stays wide and shallow during the first mile or so, narrowing once you weave out of state park property where the bottom fills with deep holes and smaller springs.

Adventure lovers will also find rope swings and platforms to jump from in this section of river. As the river continues winding, the brush grows thicker and the trees above give the appearance of traveling through a tunnel of greenery. Even farther downstream, the river winds though a few small neighborhoods.

SUP rentals are available at the state park or pack your inflatable SUPs. The Ichetucknee River in northern Florida is famous as a tubing river in summer. A favorite time to paddle board the river and experience this exceptional slice of Florida beauty is in the winter.

In the winter, without tubers to scare them away, Ichetucknee Springs State Park is full of birds. Heron, ibis, egrets, cormorants, anhingas, limpkin and wood storks are all common sights on a paddle board trip down the 3.5-mile-long run.

Instead of the squeal of exuberant tubers, Ichetucknee Springs State Park is so quiet in the Winter that other paddlers seem to speak in reverent hushed voices. The scenery itself is stunning to take in from a paddle board any time of year. With eight major crystalline springs, the water is as clear as a swimming pool. 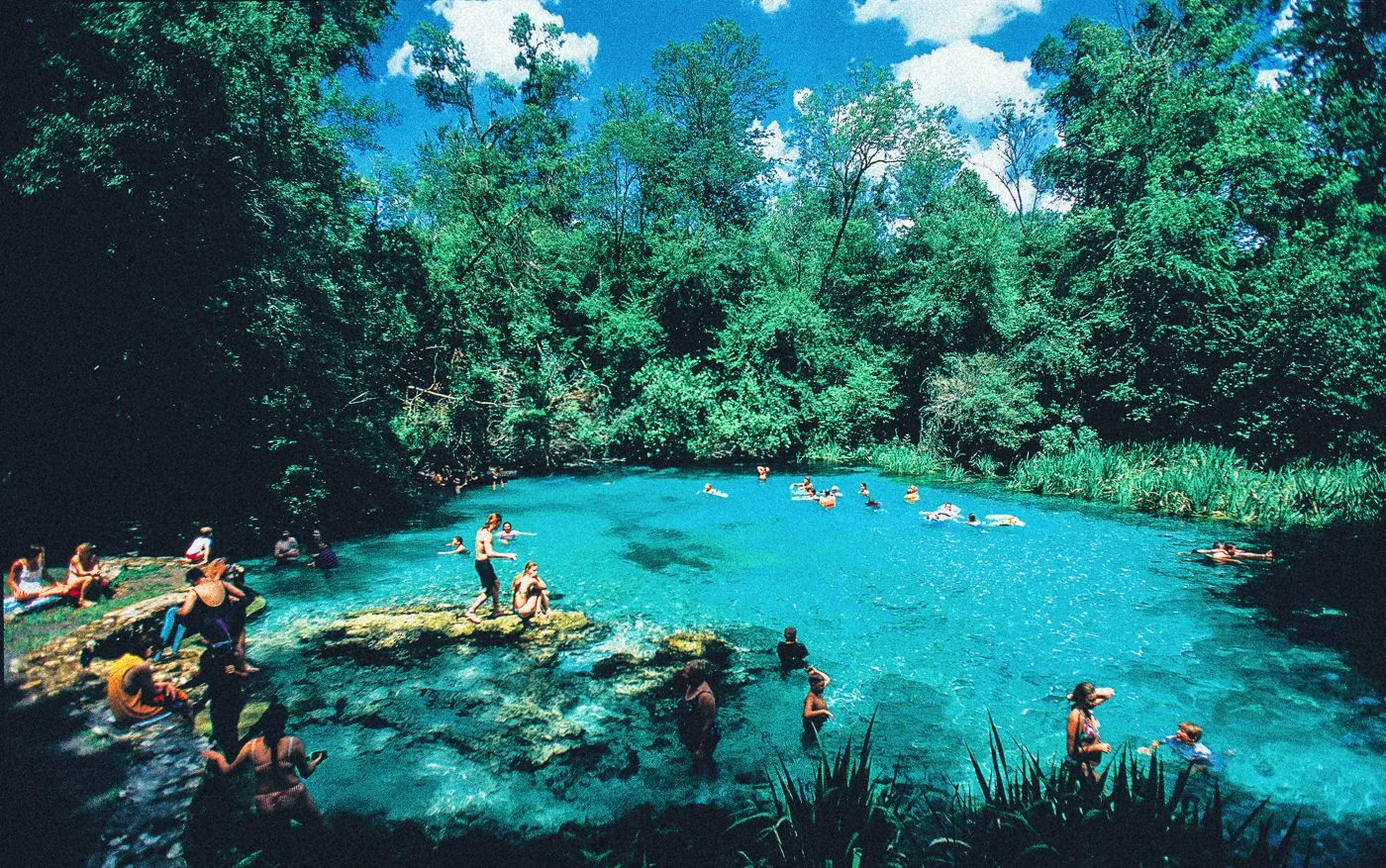 In the water, seagrass waves in the current; schools of fish and turtles appearing to fly in water so clear it seems invisible. The upper portion of the river is a National Natural Landmark- some say it's the most pristine spring run in the state. 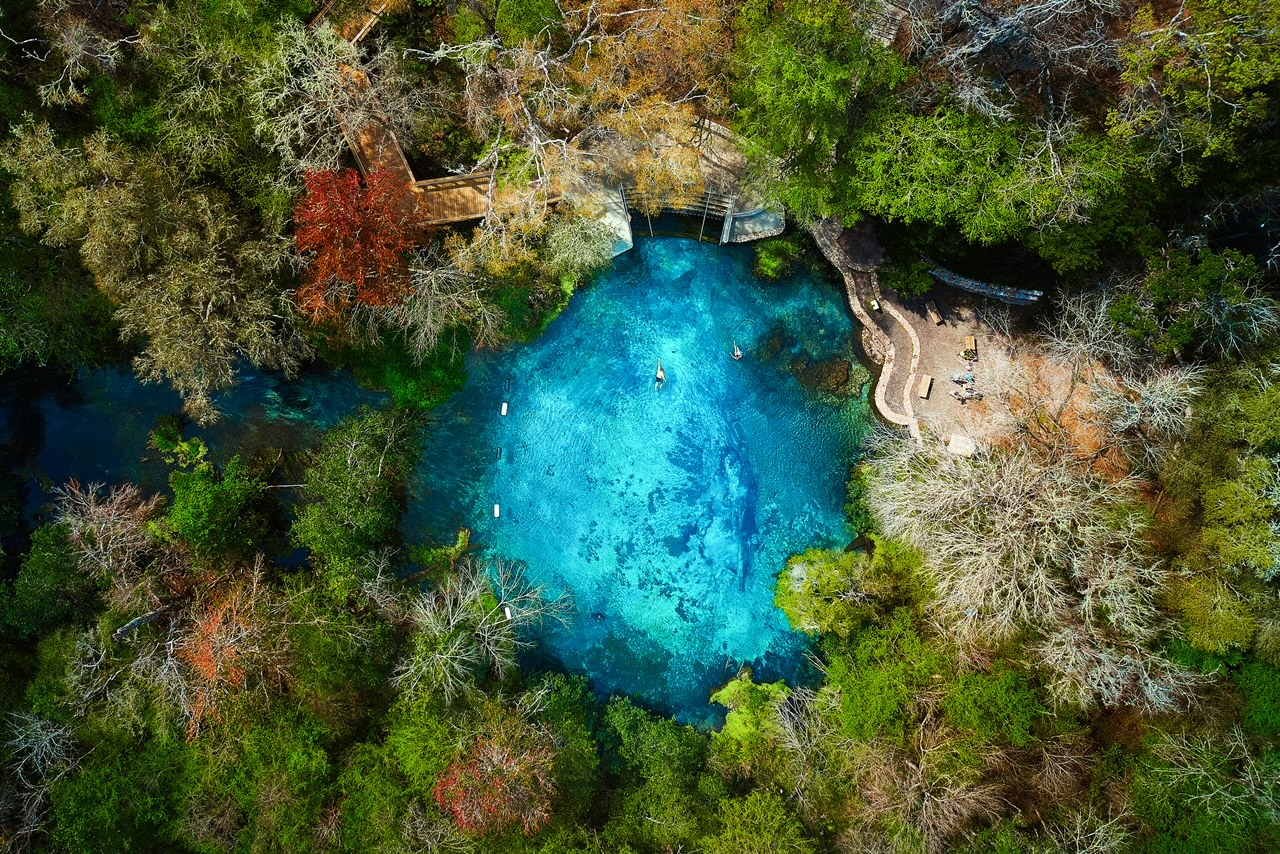 So the next time you head to Florida, skip the predictable tourist attractions and explore the Florida that is mainly just known to the locals on your stand up paddle board. It doesn't matter if you choose hard paddle boards or inflatable SUPs, the Florida paddle boarding experience is nothing short of epic!

Where to Paddle Board in Texas?

Where to SUP in Washington State